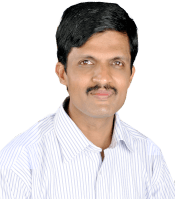 Srinivas is the Founder-CEO of Vigyanlabs and has over two decades of experience in Information Technology. He has architected some of the world’s largest and complex software systems and products that include the AMADEUS travel reservation backbone and hp’s e-Speak. Recently, he was also the Principal Architect of the Indian’s biometrics based national ID program - ‘Aadhaar’.

He holds four United States Patents including his latest one for “application sensing” power management of IT Infrastructure. He holds a master’s degree in technology from the Indian Institute of Technology, Bombay and Bachelor’s degree in Technology from Shree Jayachamarajendra College of Engineering, Mysore. Prior to starting up Vigyanlabs, Srinivas was with Hewlett Packard and Perot Systems.